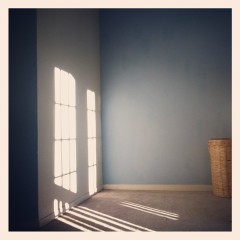 My view this morning when contemplating bloggery and willing myself out of bed.

This morning,  after much debate, I’ve decided that Friday will heretofore be a roundup day in which I will regale you with myriad stories about the magical people, places and things I’ve encountered throughout the week.

Early in the week, I took a field trip to a place I’ve been meaning to visit for about 10 years, Xiang Yun Temple Austin. It’s a buddhist temple on highway 360. I’ve passed it countless times over the years and have remained intrigued by it.

According to the temple website, Xiang means fragrance and Yun means cloud, which is 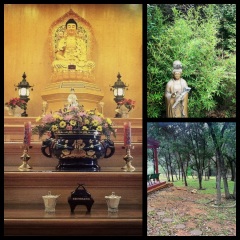 fitting being among the fragrant cedar trees on the edge of the Hill Country where the hills meet the sky.

The grounds and the main hall of the temple are peaceful and infused with buddhist symbols and imagery, such as statues of the Buddha, fresh flowers, offerings of fruit on the altar, drums and dragon statues.

There is a tea room on the premises, with one seating area by the windows featuring low-slung tables and cushions and another area in the middle of the room with more traditional tables and bamboo stools. It was closed on the day of my visit, because it was cleaning day at the temple, a ritual for the Chinese New Year. (Sidebar: Because of the tea room being closed, I ended up discovering Zhi Tea, which you can read about here in an earlier blog post.)

In conversation with one of the monks, I said, “I thought I may have visited on a bad day, but then realized it’s a good day.” She said, “Everyday is a good day.” We both smiled. 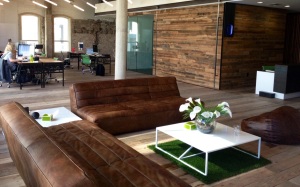 Later in the week, I toured the offices of Peddle.com, an internet company housed in the Buttrey Building downtown. The company’s owner worked with designer Joel Mozersky of One Eleven Design and Alter Studio Architecture.

I don’t want to give too much away, because I’m writing about the Peddle offices for a print piece to publish in February, but with its rustic modern look and homey atmosphere, I’m surprised the employees ever go home. Which is part of owner Tim Yarosh’s masterplan to create a workspace where people want to hang out, be creative and enjoy work – as much as that’s possible to do. Frankly, I want to live in these offices.

That day, after my tour of the offices and interview with Mozersky and Yarosh, I popped over to the 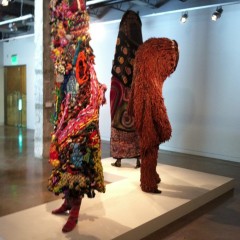 I was struck by Cave’s sound suits, which are otherworldly, yet because of the textiles he uses, the pieces have a familiar vibe. The video in the back room is rad. It features people in his creature-like sound suits dancing in tribal fashion and pogo-sticking to electronic music.

At first, I’ll admit, I wasn’t too keen on the Coolquitt pieces, but became fascinated with his light fixtures. What can I say, I love lamp. 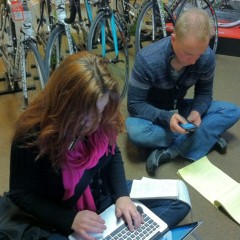 Me reporting for Reuters and my dear friend and partner in crime Gary Dinges for the American-Statesman on the scene at the Nelo’s Cycling Oprah/Lance watch party.

After the exhibit, I walked over to Cafe Medici (on Congress Avenue in the swank Austonian building) to absorb the art exhibit and return emails, while sipping a spectacular latte made with Cuvee coffee, a roaster about 20 miles outside of Austin. (Sidebar: Everyone who knows me or follows me on any social media will be shocked that I didn’t photograph my coffee beverage, which is why you are seeing a photo of me and reporter Gary Dinges here instead).

At this establishment I learned the valuable lesson that, beyond the possibility of a Yelp coupon, there is another fantastic reason to check in on social media: One of my editors emailed saying she saw on Facebook that I was in Austin and asked if I was available to cover something later that night. Finally, obsessive Facebooking pays off!

So, I wrote a story for Reuters about an Oprah/Lance Armstrong watch party at Nelo’s Cycles. Click here to read it. My favorite part of the night was when one of the Nelo’s guys yells to the crowd to chug their beer every time they hear the word “Sorry.” Ha! Note, this is the second sports-related story I’ve written for Reuters. The first being about Formula One race weekend. Given my apathy toward the sporting of sports, this is a supremely ironic twist in my reporting career.

That brings us to this morning, when after being smacked repeatedly in the face by my cat – the

best/worst alarm clock in the ever-verse – I dragged myself out of a warm, soft bed to trudge down to the South Lamar studios of Petrified Design in chilly 36-degree weather BECAUSE I SUFFER FOR YOU PEOPLE.

Again, because my interview with  hardworking and talented designers Gable Bostic and Tyson Pendergrass will soon run in print, I’ll just offer a taste here on the blog.

Friends Bostic and Pendergrass create handcrafted Texas modern furniture, which you can find online and in Austin at Mockingbird Domestics. They also love craft brews and coffee.

There you have it, my week in a nutshell and perhaps the longest blog post in history. As you noticed, because I know you are all very smart and observant, I love to explore, learn about new places and meet interesting people. I hope you enjoyed my adventures as much as I did and I hope you’ll share yours with me. Have a fun, adventuresome, relaxing or whatever it is your into kind of weekend.

In case you didn’t already know it, Mr. Percy is living his best life, y’all. #sweetpercyboy #rescuekitty
Wildlife on the #UrbanFarm. 🌿🦎🌿

The views expressed on this and all of Melanie Spencer's sites are the author's alone and do not reflect the views of current or former employers.
Loading Comments...
%d bloggers like this: