The other day, while perusing the newsstand at Barnes and Noble, I was struck by the cover of the May issue of Vanity Fair. Peeking out between magazines featuring Tiger’s mistresses and Secretary of State Hilary Rodham Clinton (“People” and “Newsweek,” respectively), was the cool, controlled gaze of Grace Kelly. 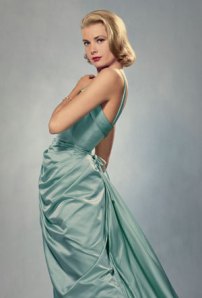 From http://www.vanityfair.com: Grace Kelly for “Life” magazine wearing the gown designed by Edith Head that she wore to the 1955 Academy Awards. © Philippe Halsman/Magnum Photos.

Few women in the world, now or in the past, (even January Jones, who is practically Kelly’s twin in AMC’s “Mad Men”) personify the charm, style and grace of Kelly. And if ever there was a time that we needed a role model who stands for elegance, manners, self-possession, sensuality and sheer class — in this post Emily Post America, where scandal, vulgarity, incivility and gossip reign supreme — it is now.

With all due respect to Jackie O, the beyond reproach Audrey Hepburn and our ever-stylish and gracious current First Lady, Michelle Obama, I vote for Kelly.

Perhaps our feminist friends would disagree, but we at Re-find would go so far as to say Kelly was a very modern woman who was ahead of her time. She broke the mold in her conservative Irish-Catholic family to pursue acting (against her father’s wishes) and she remained in control of her career, class, finances and fame when many actresses around her succumbed to the pitfalls often associated with life in Hollywood.

Something we could all learn from Kelly is her innate sense of quality over quantity. Whether it was the amount of skin showing through the neckline of her dress or a suggestive kiss with the leading man in one of her movies, she always left people wanting more.

The views expressed on this and all of Melanie Spencer's sites are the author's alone and do not reflect the views of current or former employers.
%d bloggers like this: