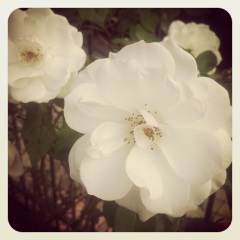 Stopping to smell the fleurs in my hood

It was a pretty quiet week by all accounts, but admittedly, I needed that kind of week. Sometimes it’s good to take a step back, slow down and refill the creative well.

For me, that usually entails long walks, usually in my Houston neighborhood of Montrose. There’s no zoning in Houston, so that makes for a chaotic and often comical mishmash of architectural styles, especially in artsy neighborhoods such as Montrose.

For example, a charming, one-story, 1940s bungalow might be tucked in next to a four-story Mediterranean behemoth, next to a blocky, modern wonder, next to a seemingly bombed out abandoned warehouse.

There is no rhyme or reason, which keeps it visually interesting and it’s sort of a great conversation starter. Also, as illustrated in the above photo, my neighbors grow beautiful flowers and I get to enjoy them on my walks.

I also got crafty this week, which is unusual for me, as I don’t consider myself

I made this with glue!

a crafter. Years ago, I made a plastic bag holder, so that when the plastic scourge is forced upon me and I have no choice but to leave an establishment with it, I can at the very least save the bags and use and use them some more. But, I didn’t like any of the holders I saw out there in the world, as they usually had fabric with chili peppers or little  country houses and whatnot, which just isn’t my style (now there are so many cute ones on the market, like these I found on Etsy).

Though I cannot sew myself out of a plastic bag holder, I managed to piece together a handy and stylish holder using fabric, grosgrain ribbon and fabric glue. As mentioned, it somehow has lasted years and is holding up like a champ, apart from the ribbon coming loose the other day. So, armed with Gorilla Glue (the greatest invention ever if you are clumsy), I repaired the “handle” and added a little fleur-de-lis detail using my letter wax and seal. Magical!

Blacksmith Coffee Shop is the newest on the bean scene.

As the week wore on I was pretty bored with walking, crafting and catching up on episodes of “30 Rock” — OK, that last one is a lie, because I never, ever tire of that show. So, I checked out the newest addition to Houston’s bean scene (I totally just made that up “bean scene” and it made me laugh when I said it in my head), and to my ‘hood (it’s not just wacky houses and flowers, people!)  Blacksmith Coffee Shop, at 1018 Westheimer (right next door to Burger King and across from Hay Merchant and Underbelly).

(Sidebar: Did you think I would ever get to the end of that sentence up there? Me either.)

Brought to you by Bobby Heugel of Anvil Bar & Refuge fame and David Buehrer, the local roaster behind Greenway Coffee Company and the reason I’m awake most days, Blacksmith is serving up yummy eats and handcrafted coffee. The interior is simple, featuring a lot of steel work as one might imagine given the name. Clean lines and natural materials define the space. I’m a huge fan of the bar running the length of the window, because it’s wide, offering a good deal of space for laptops, notebooks and, oh yeah, food and coffee.

That brings us to today (FINALLY), when I met and interviewed Marie

Flanigan of Marie Flanigan Interiors. Flanigan has been a great source of mine for the past year (check out this piece on creating hotel style at home) and I was thrilled to get a tour of her new design studios (at 2525 Driscoll), which are open to the public one day per week.

As usual, I’m writing a piece about this for print publication, so I’m not giving up all of the goods, but via collaborations with local design favorites such as Circa Lighting, Mecox, Lam Bespoke, Ligne Roset and Laura Rathe Fine Art, to name a few.

My meeting with Flanigan was an inspiring end to a week that allowed my creative brain to relax a bit. Hearing about her new endeavor, what gets her motivated as a designer and how collaborating with local vendors and her clients keeps her energized has me primed and ready for next week, in which will involve writing, writing and then some additional writing.

How do you get and stay inspired to create? Share it with the group, then go out and have a great weekend. You deserve it after the week you had, no?

1) Y’all, I am now a Registered Yoga Teacher (RYS) with @yogaalliance! It’s the largest trade organization for yoga professionals, representing high quality, safe, accessible and equitable yoga teaching. One of the reasons I picked @myvinyasapractice for my teacher training is because it’s a YA-approved school.
The news that @thichnhathanh died today made me sad, even though he led an amazing and full 95 years. What a legacy. What a teacher. I’ve read and recommended his books and shared his articles over and over again.

The views expressed on this and all of Melanie Spencer's sites are the author's alone and do not reflect the views of current or former employers.
Loading Comments...
%d bloggers like this: